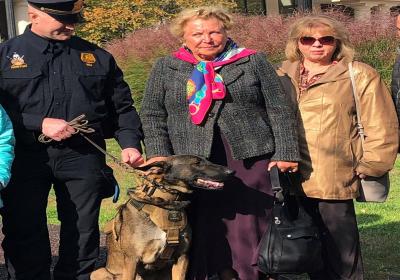 Mayor Joe Ganim and Police Chief AJ Perez welcomed Dennis, the Explosive Detection Canine to the Bridgeport Police Department. The Belgian Milionis joined the K9 Unit thanks to a donation from Joan and Jeffrey Hickey in memory of Dennis F. Hickey, beloved husband and father. Dennis lost his battle with glioblastoma brain cancer in September 2016.

Sonitrol Security Systems of Bridgeport was founded in 1973 by both Dennis and Joan Hickey. Jeffrey worked alongside his father for many years and in 2001 joined him full time. The Hickey’s felt donating an Explosive Detection Dog would be a great way to honor Dennis’ legacy with the work Sonitrol has done protecting Bridgeport, Connecticut and surrounding towns especially schools and municipalities.

Officer K9 Dennis was born in Holland and trained by the US Department of Defense. He was deployed to Afghanistan and when his mission was completed he became available to us. On October 23, 2018 K9 Dennis was inducted into the Bridgeport Police force. He will live with his handler sergeant Erick Norton, and together they will protect our communities for many years to come.

Over 98% of alarm activations are false alarms. And with each alarm call costing taxpayers in police time and resources, more and more communities are looking for ways to respond to alarms more effectively. Many communities now require verified response—confirmation by an alarm company or an eye witness that an actual intrusion is in progress—before dispatching police.

The average police response time for non-verified alarm activation now exceeds 45 minutes in many communities. The longer the response time, the lower the chances of police stopping an intrusion in progress and apprehending the criminals.

Increasingly sophisticated crimes, including internal theft and fraud, and crimes accompanied by other disasters such as fire or explosions, overtax traditional alarm systems.

When & Where you need it most

Single source integrated security solutions for intrusion, video, access and fire. As more cities and municipalities require verification before dispatching police to an alarm, our ability to verify intrusion—through patented technology, in real-time—offers unrivaled credibility with law enforcement and security for our customers.